After 3 years of review cycles and project setbacks, work has finally begun at 10202 Rainier Avenue South. Four dilapidated cottages have recently been removed and excavation for the new homes is currently underway.

Expansive views across Lake Washington inspired the orientation, site layout and window placement for all three new homes which gently march up the steep sloping property.  Each home includes a 2 car garage, large recreation room with an outdoor shower and additional space to for water gear and boat storage.  The Kitchen/Living/Dining levels feature an open floor plan, wet bar and fireplace, and a home-office niche off the kitchen.  Large sliding doors open onto decks with deep overhangs, strategically positioned to allow for year-round enjoyment of the stunning natural setting.

An easement has been created along the eastern side-yards for direct access to the shared waterfront and dock.  A portion of the original dock will be removed along the waters edge to reclaim the natural shoreline for native habitats and a new natural beach will be created for recreation and boat storage.  A bio-retention planter for storm-water mitigation will provide separation between the private rear yard of the waterside home. and shared beach 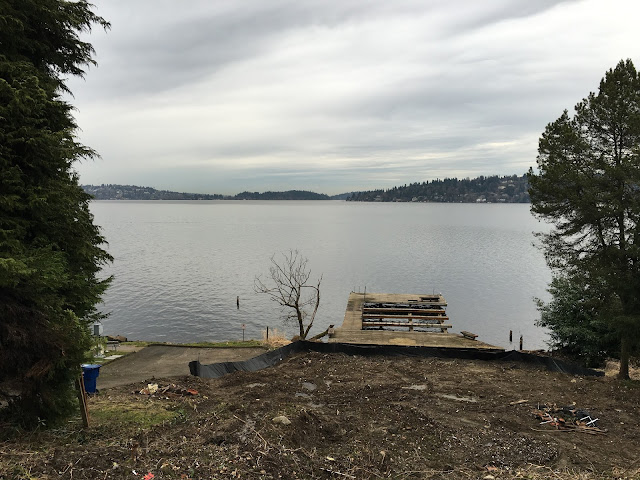 View towards Mercer Island , Seward Park and beyond

Posted by David Taber at 8:27 AM No comments:

Seattle was built out as a city of single family homes, but that model has run its course. Most of our new inventory is coming in a denser form – rowhouses and townhouses. As a city we have resisted these changes socially and politically, at great volume. Why are we so unhappy with these new housing forms? To borrow a phrase…It’s the car stupid! To be more precise, it’s the negative effect parking has on the design and configuration of our housing, creating homes that are less livable and less beautiful.

So, how can we build a denser city as appealing as the single family fabric that came before it, while managing all the cars?  Read my new article at Crosscut to find out!

Posted by David Neiman at 8:19 AM No comments:

We were honored to be included in the NW Eco-Building Guild's 2015 Green Building Slam.  The event featured ten projects; each presenter got ten slides and ten minutes.  It was a great opportunity to show off Marion Green to a large audience of our fellow architects, builders, developers, and green building enthusiasts. Click here to see a video of the presentation

The project was really well received.  It is my hope that events like this (and my relentless self-promotion!) will help spread the word about this important new housing type and help speed its adoption in the marketplace. We are working on an article for the Eco-Building Guild's Code Innovation Database that will document they ways we navigated this project through the land-use and zoning code so that others can more easily follow.

Speaking of which, our next courtyard project, Olympic View, is speeding its way toward completion.  Check it out here.
Posted by David Neiman at 11:55 AM No comments:


When we started work on the Yobi Apartments in 2012, our goal was to re-invent the micro-housing model.  Our vision was inexpensive private rooms paired with common amenities, arranged so as to help build community among the residents that shared the building.  We wanted to prototype a better model with the hope of influencing others to follow.

Yobi was completed a few months ago and received much attention and positive feedback.  Since that time, there hasn’t been a whole lot of new congregate housing development (due to 2014 zoning changes that have suppressed it).  Last week I noticed a new project from Calhoun Properties working its way through the permitting process.  It's the first congregate project (from outside of our office) that I've seen since the 2014 code change, so I was eager to find out what they had planned. When I found their plans online, I was pleasantly surprised.

Calhoun’s new project has many features and communal amenities that are organized similar to the Yobi.  The building has one main entry, organized just like a typical apartment building.  The main floor has a generous shared common kitchen with an adjoining dining area, lounge, laundry room, and south facing patio. Each upper floor has a shared double kitchen, dining room, and view deck.  Their new project bears no trace of the old pod model.

Calhoun is not just any micro-housing developer. They more or less invented pod style micro-housing, developing 17 pod style projects over the last few years. A successful business often has low motivation to mess with their development model; Calhoun deserves a lot of credit for their willingness to do so. This shift to provide more communal space bodes well for future projects and validates our contention that there was a better way to design this housing type.

Score a huge victory for the cause of re-inventing micro-housing. Now we just need to re-legalize it.

UPDATE: The original version of this post took for granted that Calhoun Properties new project was inspired by ideas developed at the Yobi.  They contacted me to let me know that, while they read this article with interest, they were not aware of the Yobi and so it did not influence this project; the resemblance is a case of co-evolution rather than a progression. The post has been changed accordingly.

Posted by David Neiman at 11:21 AM No comments: