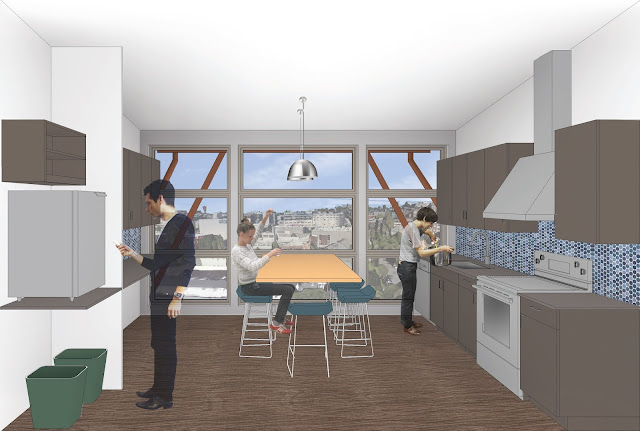 The Yobi Apartments is finally ready.  This project has been much discussed as a new model for how to build microhousing in Seattle.  The Yobi was designed from the ground up with the conviction that congregate housing can be a desirable housing option where the architecture and the shared features can support chance interaction and help to build community among the residents.  For microhousing proponents and critics alike, we welcome you this open house to learn more about microhousing and what it can be.

A review of microhousing code issues and basic metrics:
http://www.theurbanist.org/2014/09/18/an-architects-perspective-the-details-of-microhousing-projects/

A discussion of the The Yobi's sustainable features and energy use:
http://neimanarchitects.blogspot.com/2015/02/re-inventing-microhousing-yobi.html


Should the Seattle City Council revisit restrictions on micro-housing?
http://www.seattlemet.com/articles/2015/7/17/hala-report-calls-for-modifying-barriers-to-pod-apartments

Posted by David Neiman at 11:02 PM No comments: 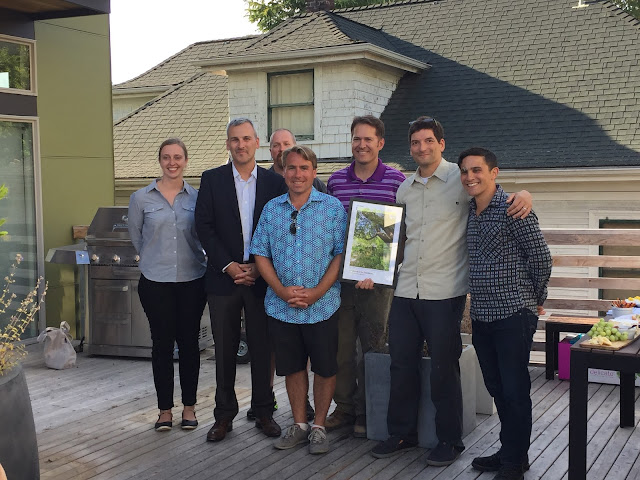 We had a little party today to accept a Puget Sound Regional Council Vision 2040 award for our Marion Green Townhouses. The homes were completed a few months ago, but this is a project that has been more or less nine years in the making.

In 2006, Scott Clawson and Todd Allan walked into my office with a piece of land. They wanted to build a little townhouse project, keep one unit for themselves & hold the other two as rentals.  At the time I was just starting to get into development projects.  I knew very little about townhouses, just enough to be aware that virtually every project was built in the same way:  Build units in the front, units in the back, and the center of the site is a driveway zone that gets you to the parking garages.  Scott and Todd asked me if I could design them one of these. I took one look at the cross section of the building & said "well, you could, but this is a really bad housing design.  Why not just cover the center with a deck?  That would hide all of the car parking & the center of the project becomes a community open space that you all enjoy."   Simple, right?

Turns out why not is because this concept violated about a dozen development standards of Seattle's land use code.  To do this simple little project we had to volunteer go through the design review process to get permission to depart from all of the various standards that we’d need to get the project done.  All told it took over two years to get our permit approvals, and by the time we work our way through the process, it was the fall of 2008, which you may recall was when the entire economy collapsed.  Bank financing dried up, the project foundered, and never got built.

I was upset that we didn’t get this little jewel of a project built but even more so that as a city, our codes were wound so tight that it was a “good ideas to the back of the line” kind of situation.  As it turned out, the Department of Planning and Development was of a similar mindset, and beginning to study a re-write of the multi-family code.  It was becoming clear that we needed to liberalize our land use code if we were going to make good housing possible.  I spent the recession organizing a group architects to work with the city on the code language, and also to go out into the community to give presentations, explain the code changes and why they were necessary.

By 2011, we had a new code in place, and as it turned out I was the person who had spent the most time reading it.  This gave me an opportunity to meet a lot of developers who came to me to ask what was possible under the new code.  This is how I met Joe Paar.  He was one of the first people that recognized the value of combining technical code knowledge and design skill to develop more successful projects, in every sense.  When I decided to develop my first project, I needed a partner to help make the finances work.  Joe was the guy that I asked for help & within a couple minutes discussion we were off to the races.  Joe was a true partner at every step of the way, and he deserves a lot of credit for getting this project successfully to the finish line.

All told it took nine years from the first sketch to where we got to stand in the courtyard with the project team and take a victory lap.  From the outset my goal was to build a better mousetrap:  Provide a replicable model for a better way to do infill housing in Seattle. I truly believe we’ve done that.  We’ve found a way to hide the cars, create more open space, break down project scale, bring more natural light into the homes, and most importantly, provide a commons that helps facilitate and build community among the families that share this little plot of land.  I'm also happy to say that other people have started to pick up on this model.  There are now four other courtyard lid projects in the works, two by our office, but two others by different architect/developer teams. It is my hope that the recognition that we are received today will help to spread the word and speed the adoption of this new housing archetype in the marketplace.

Thank you to the residents of Marion Green for sharing you home with us today. I hope you enjoy living in Marion Green as much as we enjoyed making it for you.

Posted by David Neiman at 11:39 PM No comments: