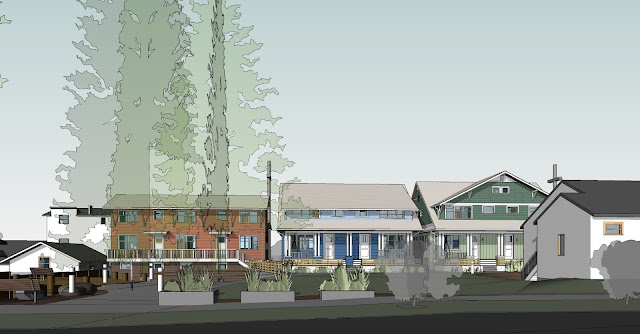 The rezone application to allow development of six new townhouses on the church green of the West Seattle Church of the Nazarene (WSCN) will go before the City Council PLUZ committee on Monday, November 27th.  The project is an interesting test case for the city's new Mandatory Housing Affordability (MHA) program. The general idea behind MHA is that a re-zone is supposed to confer value to the property owner, and in exchange the city asks the owner to contribute that value back to the city. In the case of WSCN's project, the proposed project includes a Property Use and Development agreement (PUDA) that will dedicate much of the land to a public open space, constraining the use of the site to such an extent that it will actually have less development potential after the re-zone than it does today.

The church pursued the re-zone in the first place to change the zoning from SF5000 to LR1 so that the flexible use standards of lowrise zoning could be employed to cluster the development toward the back of the lot, preserving the front half of the land as open space. We spent over four years working with their community to get support for the project, modify the Morgan Junction neighborhood plan, get a comprehensive plan change passed, get through design review, and pass through the SEPA review process. Now that they have arrived at the finish line, they are facing the prospect of having to pay a $200,000 MHA fee in order to get the re-zone that would enable their project to move forward.

The fee represents a significant chunk of the money that the project will raise to pay for repairs of the WSCN sanctuary building. The Morgan Junction Community Association has been loud and clear in their support for the project and their objection to the MHA fees as punitive and redundant.

The diagrams below show the development proposal - six units and 9,900sf of housing, compared to a development scenario under today's SF5000 zoning with three large homes, three backyard cottages and over 16,500sf of housing.

What will the City Council do when faced with a project that voluntarily provides community benefits that prevent it from using the development potential conferred by a re-zone? Does the property owner have to pay anyway even though they receive no value in return? Is MHA really about a fair exchange of value creation and value capture, or is it just a fine levied on all new development?  We'll find out next week.

Posted by David Neiman at 4:36 PM No comments: