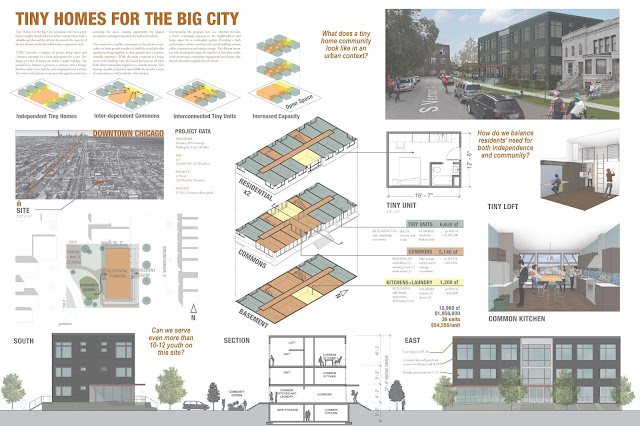 Tiny Houses and Tent Cities are in the news this week.  Councilmember Sally Bagshaw has called for a massive expansion of temporary encampments throughout the city.  Meanwhile, a consultant hired by the Mayor has declared this strategy a distraction, one that dissipates our energies and drains resources from the task of building permanent housing facilities that can support a Housing First approach.

Last month our office entered a tiny house design competition in Chicago.  The competition brief called for a 10-12 tiny house village for homeless youth, built on a large city owned lot, with a budget of $60,000 per unit.  Our entry was a  micro-housing apartment, delivering 3x the amount of housing on less land at the same cost per unit.  You don’t win many design competitions by disputing the premise. We entered it to make the point that cities have huge housing needs and very expensive land; that they need housing solutions that can scale to the size of the problem and make the most effective use of scare resources.  Donated land, non-profit services, volunteer hours…these are all finite assets.  We do ourselves no favor when we fail to use them efficiently.

A tiny house village can provide temporary shelter as a hardened, secure alternative to a tent, but that is about as far as it goes.  Beyond that we need permanent housing.  One of the reasons our firm has jumped in with both feet into microhousing is that we see it can serve a huge range of housing needs at the affordable end of the housing spectrum.  Seattle used to have thousands of units of SRO housing that served the affordable end of the housing market.  In the 1970’s we shut most of these down out of safety concerns, but we have replaced them with nothing. It’s about time for us to get started.
Posted by David Neiman at 4:06 PM No comments:

Anyone who has ever been trapped in a corner with me at a cocktail party can tell you that I spent a good deal of time helping to shape the 2011 update to the lowrise zoning code.  The new code has radically changed the work of our office for the better.  We have been able to design projects with higher design quality, more density, better affordability, in a wide variety of formats that serve niches ranging from micro-housing apartments to high-end ownership townhomes.

That said, one of the goals of our office is to innovate new ideas that are replicable. We don't just want to design pretty unicorns - we are trying to develop archetypes that other architects, builders and developers see as useful models for their own work. I sat down a few weeks ago to write an article about our Marion Green project and the other Terrace Courtyard projects we have designed with the goal of promoting the idea to others.  I showed the article to my friend Alan Durning over at Sightline.  He expressed some interest but was more curious to learn about the townhouse market as a whole, and how our work compared to the other kinds of housing being produced.

This led me to do a deep dive into the city records, looking at the last 5 years of building permits since the new code went into effect.  After a great deal of sorting, filtering, and brute force downloading, I compiled data that shows the amount and type of housing we are producing in our lowrise zones.  I was surprised to discover how much we are distorting the type, quality, and density of our ownership housing via our regulatory rules.

Thanks to Dan Bertolet from Sightline who took my ramblings and turned them into cogent reporting, no small feat when trying to make land use policy into something readable. You can see the whole article over at the Sightline blog: 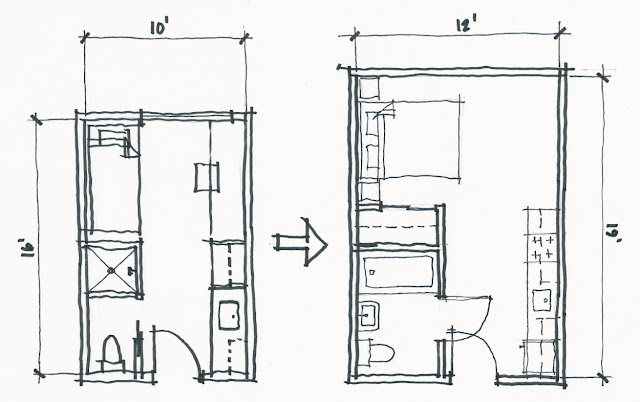 Ethan Phelps Goodman wrote a piece over at the Urbanist this week confirming the trend on microhousing that I wrote about last year:  Since passage of restrictive new legislation in late 2014, development of small housing units has continued, but production has shifted over from congregate housing into a Small Efficiency Dwelling Unit (SEDU) format that produces larger units with correspondingly higher rents.

The HALA committee saw the preliminary data on this trend and responded by including a goal in the report for the city council to revisit the new zoning rules that have radically reduced the production of congregate housing.

Congregate housing development is widely recognized as the least expensive form of housing that the market can produce. Rents typically range from $700 to $1000.  For projects that participate in the MFTE program, 25% of the units are locked in at $628 rent, including utilities. As a point of reference, $720/month* is affordable rent for someone making $15/hr minimum wage.

Before the 2014 rules curtailed the production of congregate housing, Seattle was producing over 1000 units per year, all of it affordable at 40%-65% AMI. Since the new rules came into effect, production has slowed to a trickle. Neiman Taber currently has four congregate housing projects in the building permit review process, which represents the entire current production for the whole city.

Seattle is embarking on a major initiative to try to enact a Mandatory Inclusionary Housing (MIH) program and the city-wide upzones that go along with it. This process will entail years of public hearings along with the customary resistance and rending of garments from neighborhood and homeowner groups. Politically, it is a huge lift, one of the more ambitious changes that the city has ever contemplated.

If we manage to pass the MIH program into law, it aims to produce 600 units per year of 60% AMI housing. By contrast, congregate micro-housing could produce almost twice that number of units, at deeper levels of affordability, with no public subsidy whatsoever, and all we need to do to achieve it is to remove the handcuffs.

Posted by David Neiman at 1:25 PM No comments:

This charming 2 story mid-century modern apartment building is nestled into a narrow Capitol Hill site, just blocks away from Volunteer Park.  With the building virtually untouched since completion in 1953, each of the original four units are to receive new finishes, cabinetry and appliances, added powder rooms and laundry closets, new lighting and increased basement storage.  Exterior upgrades include the repair of the original siding, the addition of private landscaped terraces, added bike storage and a more efficient waste storage system.


The 3rd floor addition had to not only compliment the form and style of the original building, but required construction of a separate stair tower.  The two large new units (800 sf and 840sf) will feature two bedroom and two bathrooms, as well as private laundry. The open plan of the kitchen/living/dining spaces features vaulted ceilings opening onto private roof decks, taking advantage of the natural light and views.

To achieve the maximum allowable floor plate, portions of the addition were strategically cantilevered over the existing second floor, further increasing the design challenge.  Large, smooth, flat panels were selected to clad the addition, juxtaposing the fine textures of original siding materials.


Scheduled for completion in May 2016