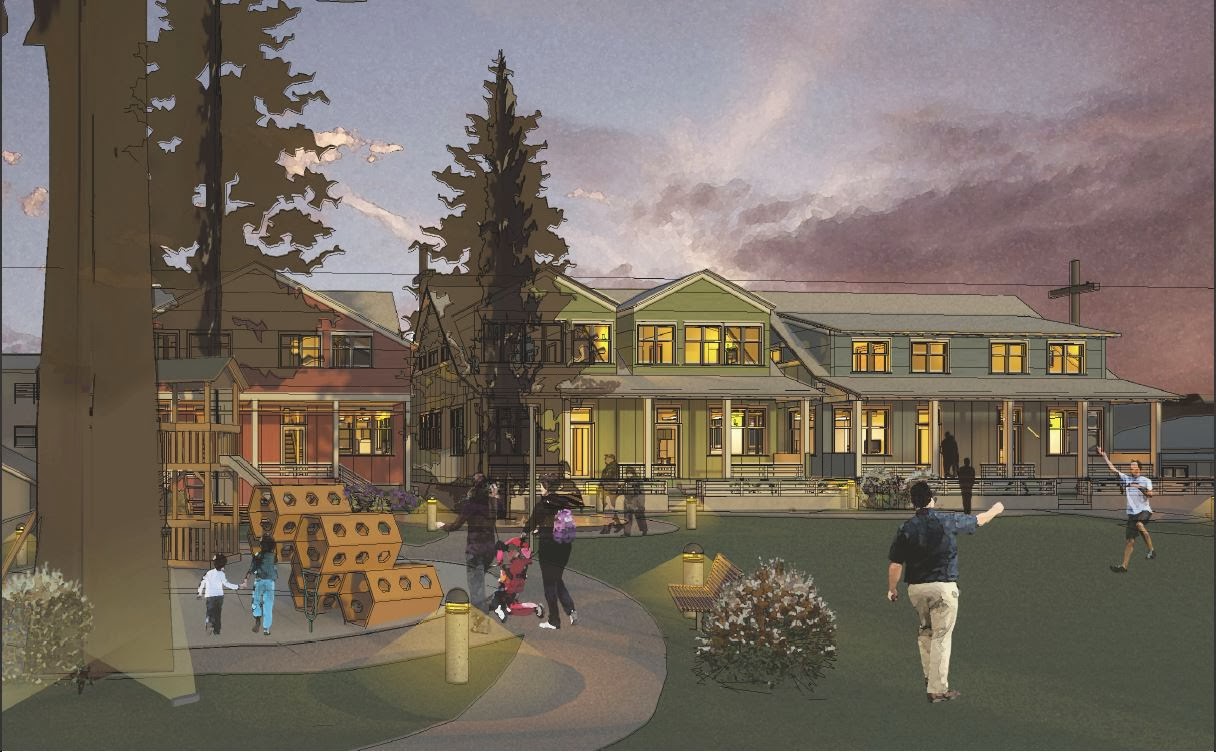 This week we released a first look at our Housing on the Green project for the West Seattle Church of the Nazarene.  The project is a joint venture of DNA, Paar Development, and WSCN. Proceeds from the development will be used to fund a renovation of the church and improvements to the grounds including a public playground.

The project features a cluster of six new homes built along the alley side of the church green.  Each of the homes has a two car garage accessed from the alley, a main living level that faces out to the public green, and a top level with two bedrooms, two bathrooms, and a sleeping loft tucked into the eaves of the roof.

Between the homes and the park are a series of transitional spaces:  A covered porch steps down to a semi-private yard, which steps down to the level of the park.  Each height transition is marked with visual cues such as railings, fences, pathways, and planting beds that provide clear definitions between the public realm and the private realm and all of the gradations in between.  The homes are not connected internally to their garages so that comings and goings from the homes help activate the commons.  In turn, people using the commons help keep an eye on the housing.  Many opportunities are created for chance interactions among neighbors that help build strong communities. 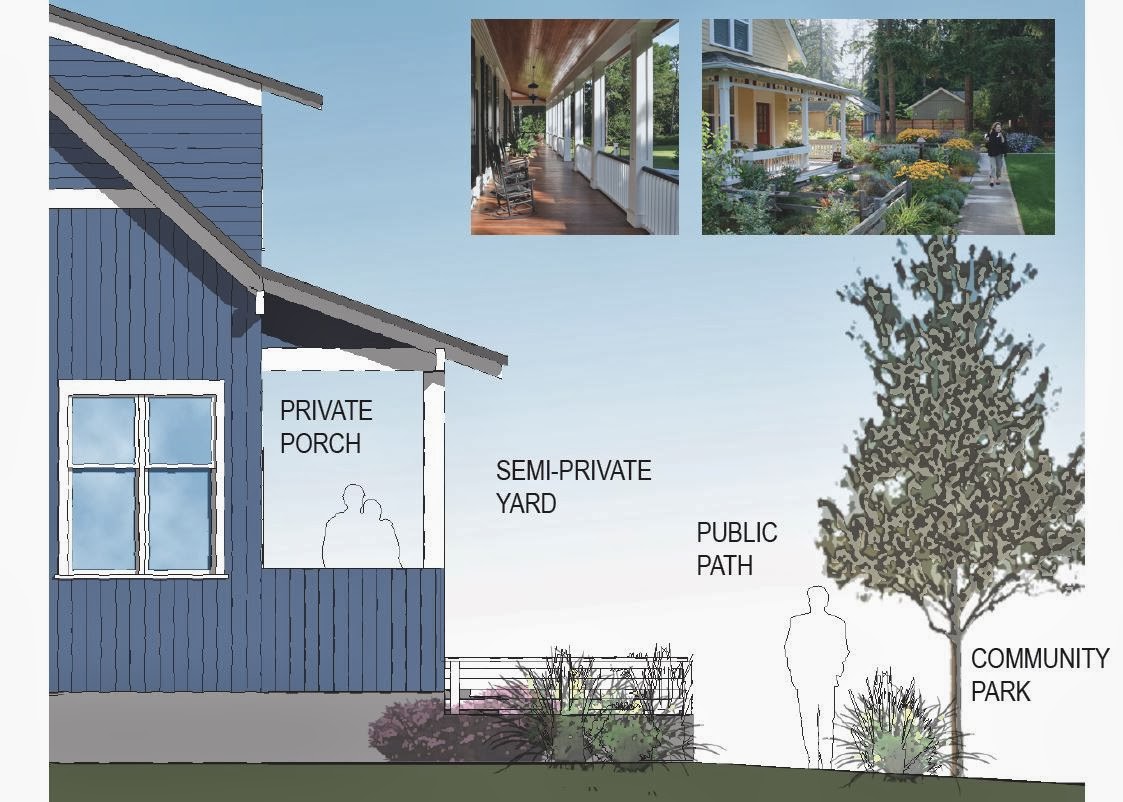 The project owes a great deal to Ross Chapin and his book Pocket Neighborhoods.  Ross has been a generous teacher, and his work has been enormously helpful in explaining concepts of community design to our clients and their neighbors.

The project has received some publicity in West Seattle Blog and KIRO, and is being followed with some interest in the community-at-large. We held our third public meeting last night, received some good feedback, and will be taking some steps over the next couple weeks to help with the public outreach some more, including:

Posted by David Neiman at 9:48 PM No comments:

Marion Green, our most ambitious courtyard townhouse project to date, broke ground last month.  One of my favorite features was that we designed the project around preserving the original streetscape, re-purposing the original garages as automobile and pedestrian entries to the site.  Partway through the permitting process, we discovered that the zoning code would not allow us to keep the automobile entry, as the existing walls blocked sight lines that allow pedestrians and cars to see each other.  In the first week of earthwork we discovered that there was not enough room on site to get equipment in and out without removing the second garage.  Finally, when it came time to start hauling away demolition debris and soil, we needed the entire front of the site for loading, at which point all of the existing site walls came down.  It was a disappointment, but one of those growing pains that all projects go through as they progress from concept to reality.

Now for the good news:  We just sold our first unit!  We got a good price (about $50/sf than the previous best comp for the neighborhood), which is encouraging, as a design like Marion Green is more expensive to build than a conventional project and construction costs in general are rising quickly in the current boomlet.  The way this season is shaping up we expect the units will sell out well in advance of project completion this fall.  For anyone following the project as an interested buyer, I would encourage you to contact the sales team soon to let them know.
Posted by David Neiman at 10:57 PM No comments:

A pair of new courtyard townhomes we designed for Paar Development are heading for completion and were recently listed for pre-sale. To help with the marketing we prepared the videos that can be viewed below:

Westview is a four unit development featuring a central courtyard shared by all of the units.  Because the site has alley access, it doesn't require an elaborate structured courtyard like Beacon Green or Marion Green. The courtyard provides private decks for each unit as well as a rain garden that handles all of the project stormwater.  Roof decks for each unit look out over Interbay and Puget Sound. Projecting decks along the street front help break up the facade and draw human activity to the public way.

Howell Green is a seven unit development on top of Capitol Hill. Like Westview it has an alley that provides access and parking, with a central courtyard that provides open space and stormwater retention.  The courtyard is set a half-level below the main floor, so that the main living areas and private decks feel connected to the common areas. The stairways are designed to have a split level entry so people can easily circulate from the private decks down to the commons without using exterior stair that would eat up space and create a lot of visual clutter. The site enjoys good southern exposure, so the units are oriented to provide more units that can capture the light and solar gain. The solar shades, the roof overhangs, and the canopies have all been integrated together to form strong horizontal planes that create visual interest, protect the areas of natural finish, and create a bottom/middle/top composition that recalls some of the more traditional buildings in the area.


Both projects are currently listed for pre-sale.  See www.westviewtownhouses.com and www.howelltownhouses.com for more information.
Posted by David Neiman at 8:52 PM No comments: