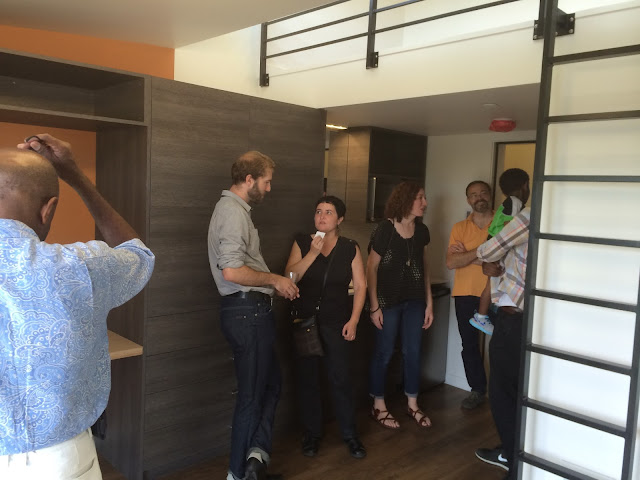 We had a great turnout for our tour of the Yobi Apartments last week.  About a hundred people came through, many of whom had never seen the inside of a micro-housing development. Our goal for the tour was to open people's eyes to what micro-housing can be: Good housing that provides opportunities for people to live in central locations and desirable neighborhoods, without any need for public subsidy.

Prior to the shutdown, Seattle was producing about 1000 microhousing units per year, with market rents that generally range from about $700-$1000/mo.  That rent is affordable to people making 50%-65% of area median income (AMI).  Participation in the MFTE would drop that rent to $628/mo, which equals 40% of AMI, or put more simply, is affordable to someone making minimum wage.

A little context: Seattle will spend the next two years pulling out hair and rending garments in order to pass the up-zones needed to enact an inclusionary zoning plan that will build six thousand units of 60% AMI affordable housing over ten years.  In the same time, we could build ten thousand units of micro-housing that would serve incomes at 40%-65% AMI.  What do we need to do to build those ten thousand units?  Virtually nothing. Just pull out the cork.

This year, we will be pushing hard to correct the flawed policy on MFTE that excludes microhousing from the program.  Next year, when the majority of the HALA recommendations come before the council, we will be making the case for changes to zoning that will remove the de-facto ban on microhousing.  In the meantime, we'll just keep building the best housing that we can.

Facebook feeds below.  Note, Councilmember O'Brien missed the tour but made arrangements for a walkthrough later in the week. 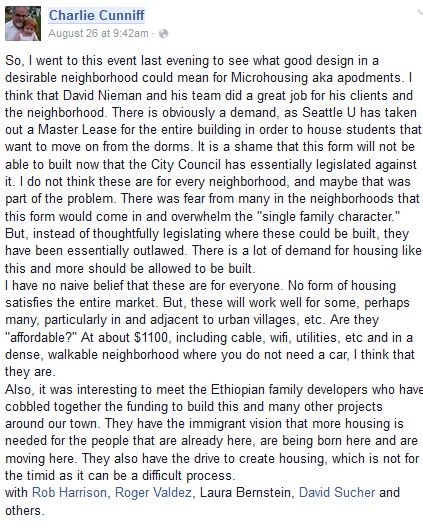 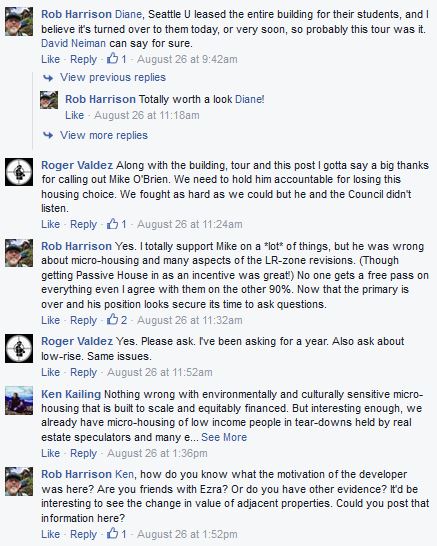 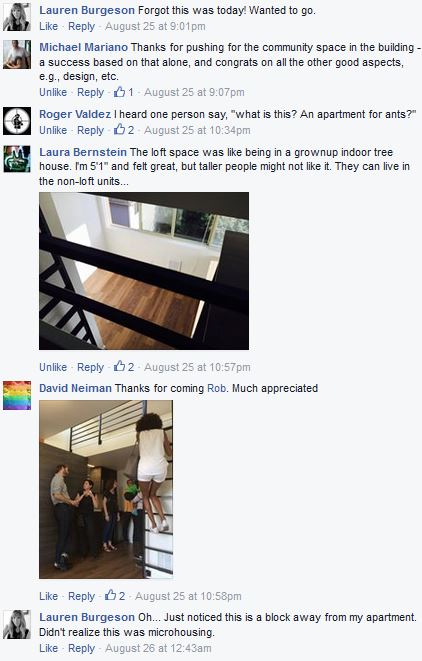 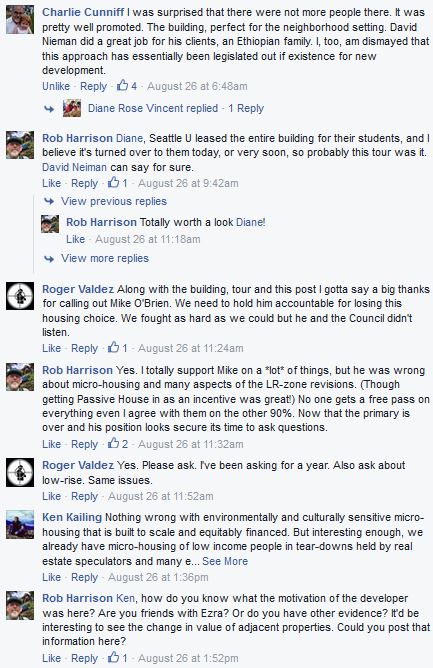 Posted by David Neiman at 10:25 PM No comments:

We need your input - Artist Survey! 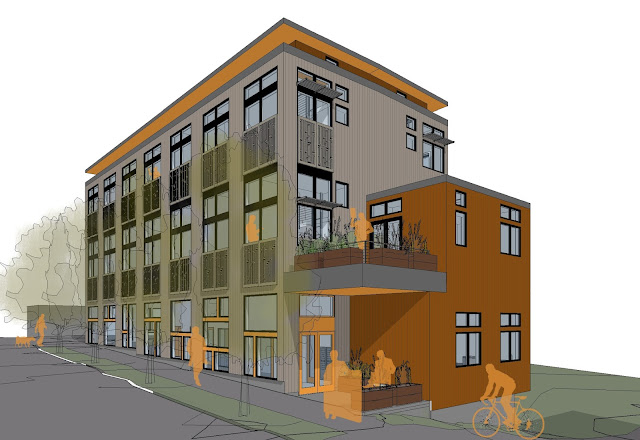 We recently started design for ArtWorks, our latest design + development effort since completing our award winning Marion Green Townhomes. Artworks explores the intersection of affordability with livable communities.  We are continuing our earlier work on micro-housing, this time to serve the needs of the local artist community.

As Seattle struggles with affordability within the urban center there is a clear need to provide affordable housing for artists. There are various models for that to happen, including subsidized housing (slow and limited funding available) and co-op housing (difficult to coordinate financially and legally), but these models will never come close to meeting demand. The Artspsace program, for example, currently has a waiting list of over 1000 people for their 150 units. The model that our firm is exploring with Artworks is based on a congregate residence similar to what we designed for the Yobi Apartments, where each individual rents a small, affordable personal live/work space and enjoys access to a larger communal creative space. Artists are a group that both needs affordable housing and could benefit from a communal living arrangement that brings artists together to share work, ideas, events, and creative foment.

The Artworks site is located across the street from the Artspace Hiawatha Lofts at South Charles Street and Hiawatha Place South in the lower Central District.  This map shows some of the neighboring art facilities and institutions that will be part of the network of resources available to Artworks tenants: 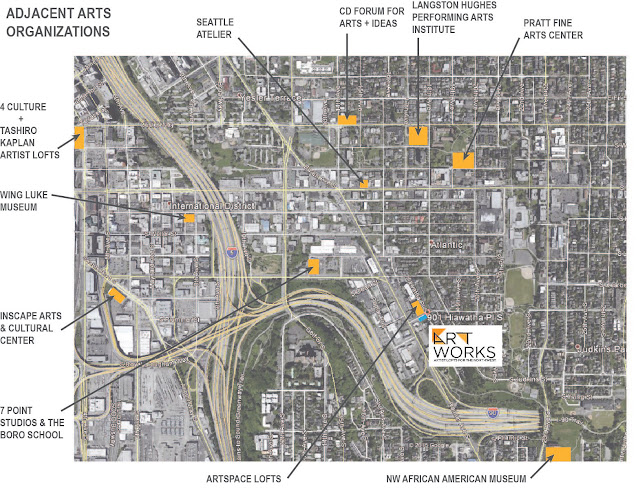 The building is composed of 33 sleeping units over 3 floors plus a daylight basement. Each resident will enjoy a storage loft in their unit, a common kitchen on each floor, and a main floor commons including a lounge, kitchen and laundry. The street level space is dedicated for a tenant that can provide a facility that would provide an amenity useful to working artists.  At this time, we are hoping to find an organization that focuses on some aspect of digital arts, such as a computer lab, maker space, 3d printing and fabrication, or other related facility.  We are willing to provide space at below market rent in exchange for finding tenant that is a good fit and can be of use to our tenants. Please contact our office if you or an organization you know may be interested in renting the space when the project is complete. 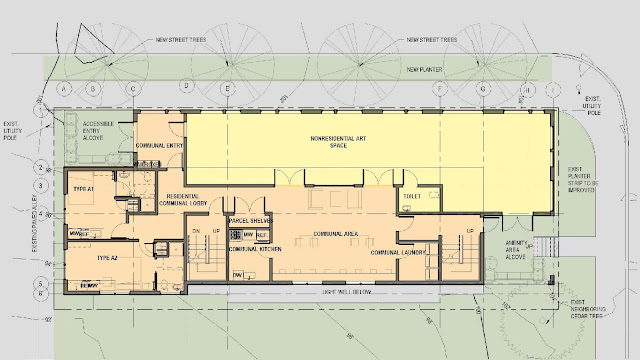 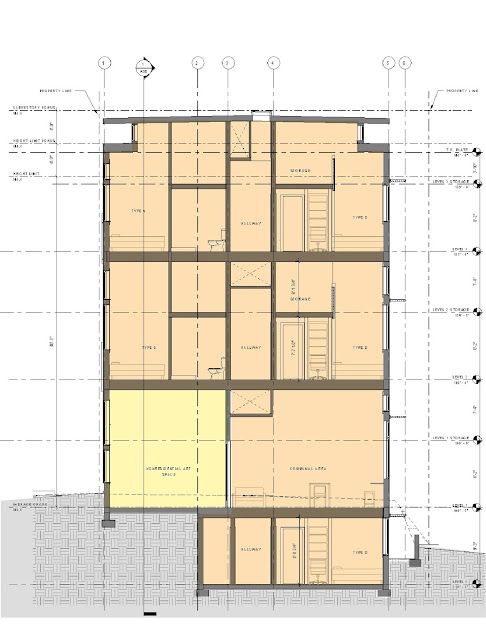 In addition to looking for a tenant partner from within the arts community, we are seeking feedback from the creative community and area stakeholders on the current Artworks proposal. Artists, please tell us what you think and share this survey with others who might be interested in the Artworks project. 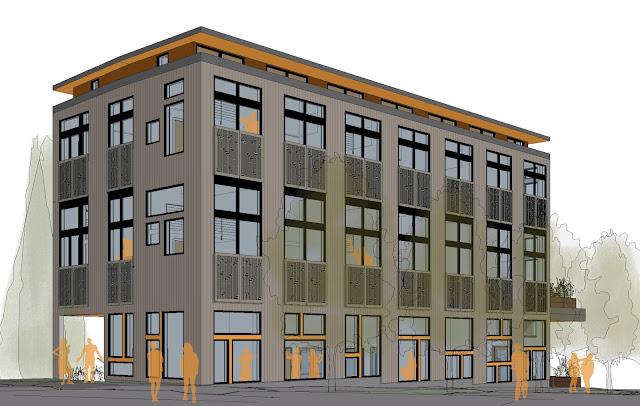 Follow-up: Unit sizes range from small basement units at around 150sf to lofted units ranging from 200-300sf.  Small units are expected to rent for around $700/mo.  Lofted units are expected to rent from $850-$1000/mo.  If the city follows the HALA recommendations and changes the rules to allow congregate housing to participate the Multi-Family Tax Exemption program, seven units would have rents capped at $620/mo.