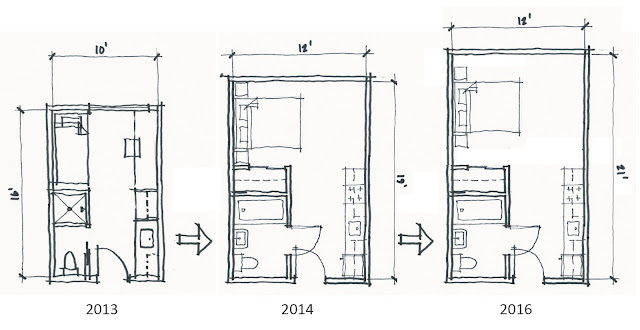 Our practice is deeply involved in micro-housing – as architects, as developers, and as proponents in the public policy sphere. Getting these projects done has become an ever-increasing uphill battle.  Taking stock and looking back over that last couple years, I think I’m ready to call it:  The war against micro-housing is over…and micro-housing has lost.

The straw that broke the camel’s back is a recent SDCI director’s rule that places new restrictions on Small Efficiency Dwelling Units (SEDU’s) to the extent that that they will no longer be meaningfully smaller than a typical studio apartment. It is a significant setback for micro-housing and the ability of private market development to help with housing affordability.  But it is only the latest in a series of unforced errors that has taken Seattle from being a national leader on this issue to leaving the stage altogether.

As a firm we have worked to create plentiful, high quality, small-unit housing, designed to support livability and promote community among residents.  We have worked to get the Multi-Family Tax Exemption (MFTE) program aligned with micro-housing development to increase the supply of affordable rent-stabilized units.  We have worked with policymakers and legislators to avoid unintended consequences when crafting policy language and code interpretations.  We worked with the HALA committee to get micro-housing promotion into the HALA agenda. Along the way we have won some kudos for our design work and for our advocacy efforts, but frankly little else.  We have had some success getting policy makers to agree with us in principle, but where the rubber meets the road we are not seeing any actual progress on the ground.  To the contrary, the policy direction is still moving backward.

How did we kill Microhousing?
There’s no one single moment where we drove the bus off the cliff.  Rather, it’s been a process of accumulated bad decisions. To help illustrate, I went back in my files and pulled together the following timeline summary of the past few years:

2007-2009:  Microhousing first appears in the Seattle Market. In 2007 Calhoun Properties remodels an existing duplex to create small units with private bathrooms paired with shared kitchens and open space. In 2009, they apply this idea to two new townhouse developments in the UW and Central District. Average unit size is about 140sf.

2010-2013:  Microhousing proliferates and evolves.  Average unit size increases to about 175sf. Production ramps up to over 1000 units per year.

2013:  New Microhousing legislation is proposed, requiring all projects to undergo design review and to include more amenities such as common areas and bike parking.

August 2014:  King County Superior Court rules that all current pod-style microhousing projects must go through the design review process.  Most existing projects switch over from pod-style to SEDU’s.

October 2014:  Microhousing legislation passes with some additional (hostile) amendments. Congregate housing is virtually banned, and subsequently disappears from the development pipeline. SEDU’s are encouraged as replacement for congregate housing.  A minimum unit size of 220 sf is required, but the minimum size is hard to achieve due to other restrictions. A 250-270 sf average unit size becomes a more typical outcome once all regulations are met.

December 2014:  A hearing examiner appeal invalidates the working definition of frequent transit, because SDCI determines frequent transit based on “average” time between transit stops, but the land use code definition does not contain the word “average”. Small unit development is no longer possible in portions of several Urban Villages.  Despite the fact that the issue was flagged by the HALA committee, and that the issue could be resolved by a one word addition to the land use code, no legislative fix has been brought forward to date.

February 2015:  The city council passes new rules that exclude congregate housing from participation in the MFTE program and sets a price for SEDU units that makes SEDU participation improbable. Since this time, only one SEDU project has applied for MFTE.

July 2015:  The HALA report is published.  HALA acknowledges the de-facto ban on congregate micro-housing, recommends relaxing recently created restrictions to increase the supply. This recommendation is not included in the city council HALA work plan.

August 2015:  SDCI enacts a new internal interpretation for the minimum clear floor space in a dwelling unit (the 70-7 rule).  The smallest (least expensive) unit sizes in all of our congregate housing projects are no longer legal. To date the 70-7 rule remains unpublished in any public document.  Applicants can only discover the issue only through a correction notice during permit review.

February 2016: Neiman Taber submits a CCAB appeal of the 70-7 rule for congregate residences, arguing it is inconsistent with the published code interpretation manual, past practices, historical models of small unit housing, and counterproductive to the very habitability and livability concerns that it aims to support.  The CCAB ruling upholds the 70-7 rule but acknowledges that we have a point.  The CCAB asks SDCI to develop a code change to accommodate the design of small congregate units.  SDCI has taken no action to date.

June 2016:  New SEDU rules are enacted apply the 70-7 rule to the entire living area of the unit. Many unit designs in the 250-280sf range will no longer meet SEDU requirements.  Note: 300sf is the bottom end of the range for a small regular studio apartment.

With the advent of the new SEDU rules, all of our projects with SEDU units will be going back to the drawing board for a re-design to enlarge the units.  An example of this change is shown below, where a project loses two units per floor under the new SEDU rules. In a nutshell, the unit count drops by about 10%, and the average unit size goes up about 10%, with rents rising accordingly.


Congregate housing production, which peaked at over 1000 units per year, has been reduced to a trickle.  Going forward, the SEDU development that largely took its place will be virtually indistinguishable in density and unit size from conventional studio apartments.  Barring any future changes, microhousing in Seattle is essentially done. There will be a few projects around the margins (mostly ours) that will continue to keep the format alive in the technical sense.  But in terms of providing an affordable alternative to conventional development at a production scale where it can make a meaningful difference?  Nope.  Game over.

How can we fix the situation?

Policymakers need to hear from citizens that care about these issues.  Here’s what you can do:

·         Ask the city council to fix the frequent transit definition in this year’s omnibus code cleanup. This is the lowest of the low-hanging fruit of the HALA agenda.  This problem has inhibited small unit development in a number of neighborhoods for almost two years, with no end in sight. Contact CM Rob Johnson.

·         Ask SDCI to revoke the new director’s rule for SEDU’s.  Size requirements beyond the building code minimums should not be superimposed on a housing type that exists for the sole purpose of being a smaller and more affordable option. Contact SDCI Director Nathan Torgelson.

·         The Office of Housing needs to revise the rules for SEDU participation in MFTE.   The rates for SEDUs should be evaluated using the same criteria as all other types - that participation is about 50%.  It is currently at about 4% (one participant for 25 active projects). Contact CM Tim Burgess and OH Director Steve Walker.

·         Put re-legalizing congregate microhousing on the council agenda. In the meantime, request that the city sell their listed surplus properties in NC3 zoning to be developed as microhousing to make up for the suppression of market production. Contact CM Rob Johnson and CM Tim Burgess.

·         Ask the city to create an executive branch staff position for a HALA cop – someone whose portfolio is dedicated to challenging city staff and agencies when their actions are inconsistent with the intent of HALA. Contact Mayor Ed Murray.